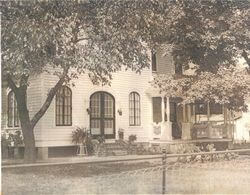 In the early 1900's, L.J. Jonas established the L.J. Jonas Funeral Home in Steelville, Missouri. Mr. Jonas was the first licensed embalmer in this area and later shared the funeral business with his son Harry Jonas.

The Brittons expanded the facilities in 1993 with two chapels and a lounge area.

On December 28, 2005, Bill and Liz Bennett purchased the funeral home from John and Ava Britton. The Bennett's had decided it was time to get closer to their home area. Some major and minor changes have been made to the funeral home, but the very best service and care remain the same.

As a locally owned and family operated business, we take great pride in the service we offer to our community. Our experience helps us offer only the very best in care to the families we serve and to share our tradition of excellence with every family in their time of need.

Although many years have passed since the original funeral home was established, one thing that has not changed is the commitment and dedication of its staff. That is why we at Britton-Bennett Funeral Home consider ourselves as "Leaders in Service and Care."